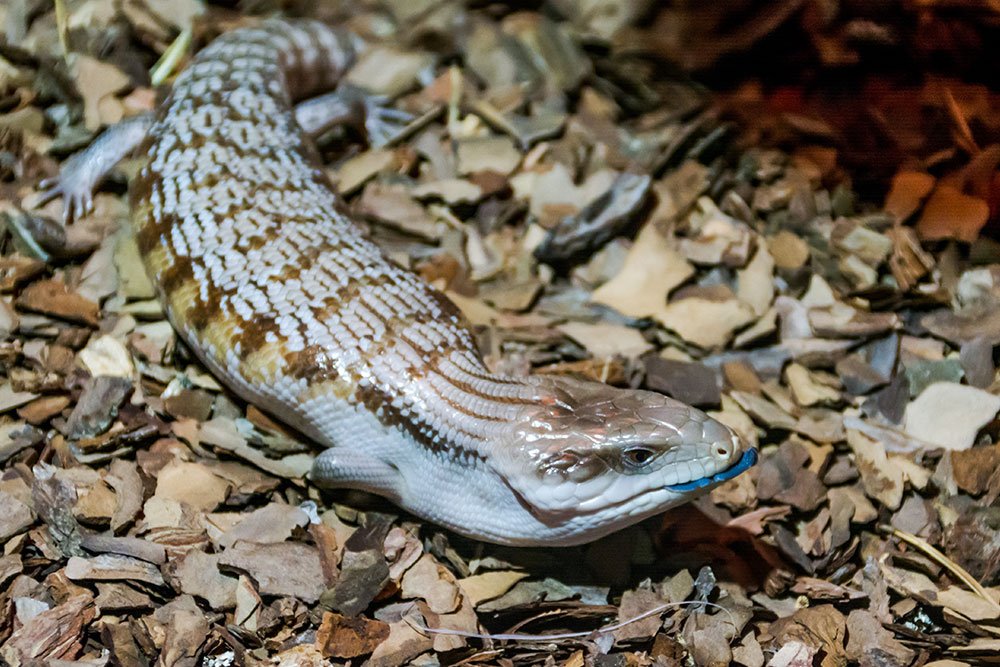 This species is generally gray or gray-brown with narrow dark bands of irregular shape across the back. T. gigas is one of the largest species of blue-tongue skink and can reach lengths of 24 inches. They can be found in Indonesia, Papua New Guinea, Jobi, Admiralty Islands, New Britain, and the Bismarck Archipelago. This species is omnivorous and will feed on wildflowers, fruit, small animals and insects.

Can often be found in semi-desert to agricultural areas of most of eastern Australia and the upper third of the Northern Territory, far northern Western Australia, and southeastern South Australia. They can reach sizes of up to 24 inches in length but generally, reach lengths of only 18 inches. This species is also omnivorous feeding on small animals, insects and plant material. This is one of the hardier and popular species found in the pet trade.

This subspecies prefers tropical or savannah woodlands of Northern Australia. Often considered the largest of the blue-tongue skinks it can reach lengths of 24 to 27 inches. It generally has uniform vertical bands which are usually chestnut colored, with orange shaded off-centered markings on the sides. As with the Eastern, the legs are gray and unmarked Because of their gentler demeanor, this subspecies generally makes for the best choice if you want a handleable pet.

Most babies can be kept in a 20-gallon long aquarium. Full sized adult blue-tongue skinks should be kept in 40 to 55-gallon aquariums or similar enclosures.

A temperature gradient of 75°-85°F should be established with a basking area of 90°-95°F during the day. Temperatures should not fall below 70°F at night.

Temperatures can be maintained with basking bulbs, infrared heat bulbs, and ceramic emitters or under tank heaters. Hot rocks should never be used due to the high risk of burns that can be inflicted on the blue-tongue skink from malfunctioning heat rocks. As with most diurnal species, full-spectrum light is required. This can be achieved by using special fluorescent bulbs or newer Active UV bulbs. Active UV bulbs also provide heat which may allow you to not have to provide additional heat sources.

Cypress mulch (avoid cedar or pine as these may cause long term health issues), a peat moss and sand mixture, and indoor/outdoor carpeting can all be used as substrates.

Blue-tongue skinks are omnivorous (eating both plant and animal matter). Generally, a diet consisting of 60% plant and 40% animal will provide a healthy mix for your blue-tongue skink. Frozen mixed vegetables, various greens, crickets, mealworms, and thawed pre-killed frozen mice can all be fed to your skink. Fresh water should be provided daily.

The enclosure should be spot cleaned daily. A thorough cleaning should be performed on a regular basis, usually once a month.